Previous Next
The World’s Tallest Statue is Just Wow

There is a good reason why colossal things in this world are often called “wonders”. Their sheer physical size overwhelms us. They make us feel small in their presence, and maybe that’s a good thing, as it inspires the gifts of humility and wonder in the face of the grandeur of our world.

Here’s one good example, although it’s fictional. Fans of J.R.R. Tolkien’s Lord of the Rings (movie version) probably felt a sense of wonder when the Companions of the Ring looked up from their little boats to behold the colossal statues of the kings Isildur and Anarion that marked the entrance to the land of Gondor. (Tolkien named them the Gates of Argonath or The Pillars of Kings.)

As far as I know, Tolkien doesn’t mention the actual height of the statues in his narrative, but neither he nor the film director, Peter Jackson, leave any doubt about their overwhelming size (notice the tiny boats in these screen shots of the movie.)

Tolkien / Jackson – The Gates of Argonath In the same way, when I laid eyes on just a picture of the world’s tallest statue, I felt a sense of sheer wonder (exhilaration, actually). It’s located in Gujarat State in Western India (about 350 miles north of Mumbai) and is called the Statue of Unity.

But this one isn’t a mythical or cinematic creation. It’s a very real, human construction that

No other statue in the world even comes close to the size of this colossus. Even with this next picture it’s very hard to get a sense of its actual size because there is very little to compare it to in the surrounding area. But here it is: Wikipedia’s helpful comparison chart gives a much better idea of its size relative to the sizes of several other famous monuments. (The chart measures in meters, but I’ve put the heights in feet below.) The world’s next tallest statue, for example, is the Spring Temple Buddha in Henan, China which measures a measly 420 feet. Our own Statue of Liberty (minus its base) reaches to 151 feet, and at the end of the line we can see Michelangelo’s tiny, tiny statue of David (although he actually stands 17 feet tall)! Wilt Chamberlain, if placed next to the David on this chart, would be about the size of a comma.

Second from last on the chart is the beloved Christ the Redeemer Statue in Rio de Janeiro, which stands “only” 125 feet tall. It doesn’t even reach the height of the pedestal of the Indian statue. (See the previous Sacred Windows piece on monumental Christ statues around the world.)

As a final familiar comparison, the heads of the Presidents on Mount Rushmore are 60 feet high, which makes the Statue of Unity ten times their height. As I said, Wow!

Just who is that giant on the pedestal in Western India? His name is Sardar Vallabhbhai Patel (1875–1950), the man whom a billion-plus Indians consider their founding father.

Most people think that title of “father of modern India” goes to Mahatma Gandhi, but Gandhi is considered the liberator. Patel is the recognized father because he was the statesman and nation-builder. 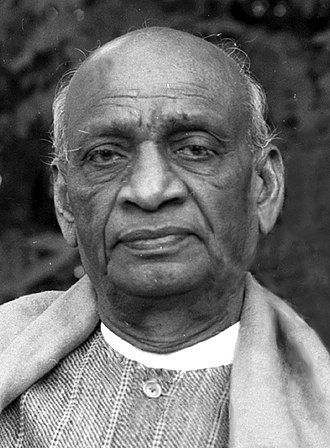 He worked closely with Gandhi in the liberation movement and then followed in Gandhi’s wake to high political office becoming India’s first Deputy Prime Minister in 1947 after independence.

Patel is not well-known outside of India perhaps because he was the number two man to the first Prime Minister, Jawajarlal Nehru, who is much better known to history and to the rest of the world.

Patel is credited, by all accounts, with unifying the 565 disparate “princely states” (small individual kingdoms) of the former British subject nation and with creating a single country that we call India today. His work ended after three intense years when he suffered a heart attack and died at age 75 in office.

He is known for his integrity, wisdom, and remarkable statesmanship because he actually convinced 562 of the 565 princes to join in the unification of India under one government. He was so relentless and single-focused about the creation of a unified nation that he became known in his day as the “Iron Man of India.”

Some have compared Patel to Otto von Bismark who unified a conglomeration of small principalities and duchies to form the modern nation of Germany in 1871. It is an adequate comparison.

But Americans might also see Patel as both a George Washington and Abraham Lincoln figure. He forged a new nation and made it one as Washington did, but he also kept India intact through a bloody civil conflict (the Partition) in 1948 when ethnic and religious factions were tearing it apart. He is thus a kind of Lincolnesque figure as well.

In 2010, India decided to build the largest statue in history to honor this man’s extraordinary contributions to their national identity. Here is another view: Human Ingenuity as a Sacred Window

I’m always fascinated by extraordinary human accomplishments, whether of individuals or groups. As per our theme, I consider them windows of wonder into a wider, fuller reality.

It’s not so much the subject of the project (in this case, just a secular leader) but the act of creation itself that draws from the human spirit an extraordinary measure of nobility and striving for high ideals. These sentiments and efforts raise hearts and minds to heaven.

This monument is certainly one of those windows. Or at least beholding its massive size has the potential to inspire that sense of wonder that is the telltale sign of all transcendent experiences.

At a time when wicked forces are tearing down our own monuments and degrading our very identity as a nation, a statue like this represents a remarkable human achievement of high and noble aspirations that we should emulate.

On a more tangible level, I’m sure engineers would have the best appreciation of the ingenuity it took to pull off a massive work like this, but even the average layman can wonder at the scope of the project. Sheer numbers tell an amazing story:

Perhaps the most amazing feature of the statue are the two “tuned mass dampers” (I had to look that one up) which are located in the upper chest cavity of the statue well over 500 feet above the earth.

These are massive spring-like balls, each weighing 250 tons, which absorb vibrations and tremors in the earth to keep the huge structure from swaying. They provide stability in the face of tumultuous natural forces. Imagine the kind of force it took to raise two 250-ton balls hundreds of feet into the air and fix them inside Patel’s chest. That in itself is truly marvelous.

One has to wonder: Could Tolkien’s Anarion and Isildur be jealous of this bronze colossus who probably towers over them? Only the author could tell us. But one thing is sure: Indians don’t fear that the father of their country will topple over any time soon.

If you have a chance to view the incredible drone video of the statue (only one minute), you will not be disappointed. It’s spectacular. In fact, the only word that adequately captures the wonder is Wow!

If you have a chance to view the incredible drone video of the statue (only one minute), you will not be disappointed. It’s spectacular. In fact, the only word that adequately captures the wonder is Wow!

PHOTO CREDITS: Statue of Unity, 2018, Tuned Mass Damper images via Wikimedia Commons and via the statue’s Official Webpage. Lord of the Rings screenshots from YouTube.

[Note: This article is a reproduction of the Sacred Windows Email Newsletter of 10/9/22, so it does not end with the regular Soul Work section. Please visit our Newsletter Archives.]